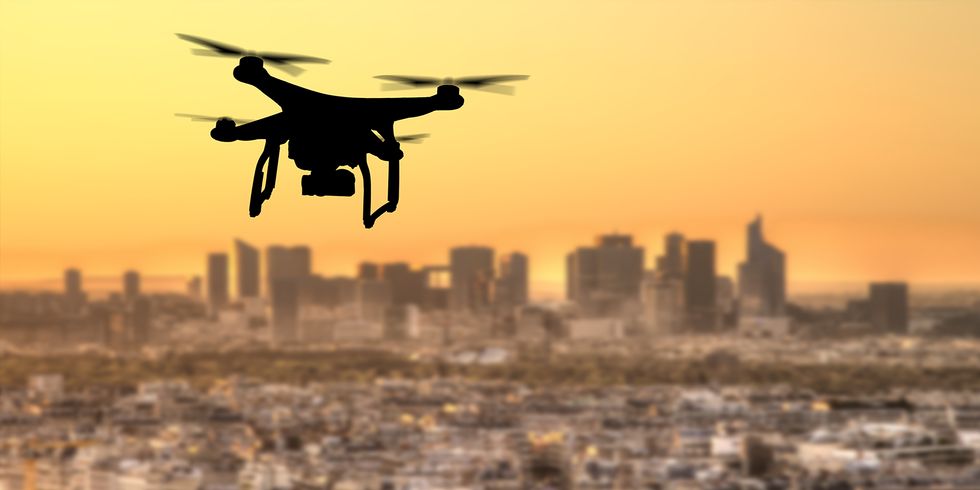 As a veteran of the Marine Corps who served as an infantry officer in Iraq and Afghanistan in the years after 9/11, Dan Burton saw drone technology, quite literally, take off.

Drones went from needing 55 people to fly, to as few as three pilots, to just one. Meanwhile, soldiers on the ground were thrilled to have a decentralized way to get dedicated eyes from above on missions.

Burton would ultimately translate that military experience into a business venture, fathering DroneBase Inc. in 2014 to provide professional drone services for hire. The Santa Monica-based company wants to give customers hassle-free aerial video, photos, mapping and data — and pairing drone-licensed pilots up with jobs around the world. DroneBase has raised more than $17 million, with VC backing from Union Square Ventures, Upfront Ventures, DJI Hearst Ventures and Pritzker Group, among others.

When it comes to the coronavirus, well, "the drone is not coughing on anyone," and so the drone and its operator are therefore less impacted, unlike a typical worker in the U.S., Burton said. Pilots are often working by themselves in more isolated situations or areas.

As a result, March was DroneBase's best month of all time, with 30% in business growth from February to March. April is already on pace to beat the record by a similar amount.

"I wish it was under different circumstances," Burton said. "But we feel we're in a position to keep America running, to help with mission critical inspections of critical infrastructure" while workforces are locked down.

DroneBase is one of a handful of Southern California companies that have flourished amid a sort of second aviation-related boom, perhaps in part due to its roots here and the major presence of aviation and government-adjacent companies, from Lockheed Martin and Northrop Grumman to the Mojave Air & Space Port and NASA's Jet Propulsion Laboratory.

"Southern California in many ways ushered in the first aviation revolution, drone tech was born here and built here by the military (contractor) companies by and large, now (the industry's) getting built again in companies in Southern California, and maybe SF, too," Burton said.

Drone-related companies have flourished in the region. The Santa Monica-based software company AirMap started in 2015 and has built digital infrastructure to provide air traffic control for unmanned aircrafts. It has raised more than $60 million from venture capital and strategic investors and has more than 300,000 users.

FLIR Systems Inc., which is based in Arlington, Virginia, develops, manufactures and sells thermal imaging, doing much of its innovation out of its tech hub in Santa Barbara. The company is also a DroneBase investor.

For DroneBase, which today has its software talk with AirMaps and uses FLIR sensors, some early jobs include helping construction sites quickly measure their inventory, or a quarry safely get video of an explosion. Burton found that companies didn't want to buy their own drones and hire their own in-house pilot. They could outsource the job instead.

The 50-person company has 65,000 pilots on its platform — or more than half of the 120,000 pilots in the U.S. who have their "107" or drone pilot license — and registers over 100,000 flights annually. The company also provides footage for news media like The Associated Press and Reuters ("We're their first phone call when they need stuff from the air," Burton said), and its pictures have been on the front page of the Wall Street Journal. DroneBase also works with content providers like Getty Images and Shutterstock to provide footage for customers.

DroneBase has a close relationship with DJI — the largest manufacturer of consumer drones worldwide — flying twice a year to its headquarters in Shenzhen, China. DJI has also attracted considerable concern from U.S. government officials and lawmakers over its data security and potential cyber vulnerabilities because of its Chinese supply chain.

In 2015, DJI and Palo Alto, Calif.-based Accel teamed up to create SkyFund, which invests in "the next generation of unmanned aerial vehicles (UAVs)." SkyFund became the first strategic investor in DroneBase, Burton said.

DroneBase pilots, who use their own drones, have flown in all 50 states and 70 different countries, Burton said, enabling its pilots to talk to each other through their software and creating sort of de facto standards for unmanned commercial drone flight.

The company has also done jobs like assessing office buildings, evaluating rooftop water damage that's below the surface using thermal imaging, or assessing the health of solar panels or wind turbines, which can be very dangerous to inspect up close and in person.

After Hurricane Harvey hit in Texas and Hurricane Maria devastated Puerto Rico in 2017, DroneBase got to work helping out with insurance company evaluations, helping speed up claims by weeks in areas difficult and dangerous to inspect in person. Their pilots flew drones from 5 feet to 100 feet off the roof, providing imagery that's far better than satellites, Burton said.

"This was very much a military technology that was subsidized by the U.S. taxpayer that's now becoming a commercial industry, not unlike fast-food," Burton said.

Do you have a story that needs to be told? My DMs are open on Twitter @latams. You can also email me at tami(at)dot.la, or ask for my Signal.