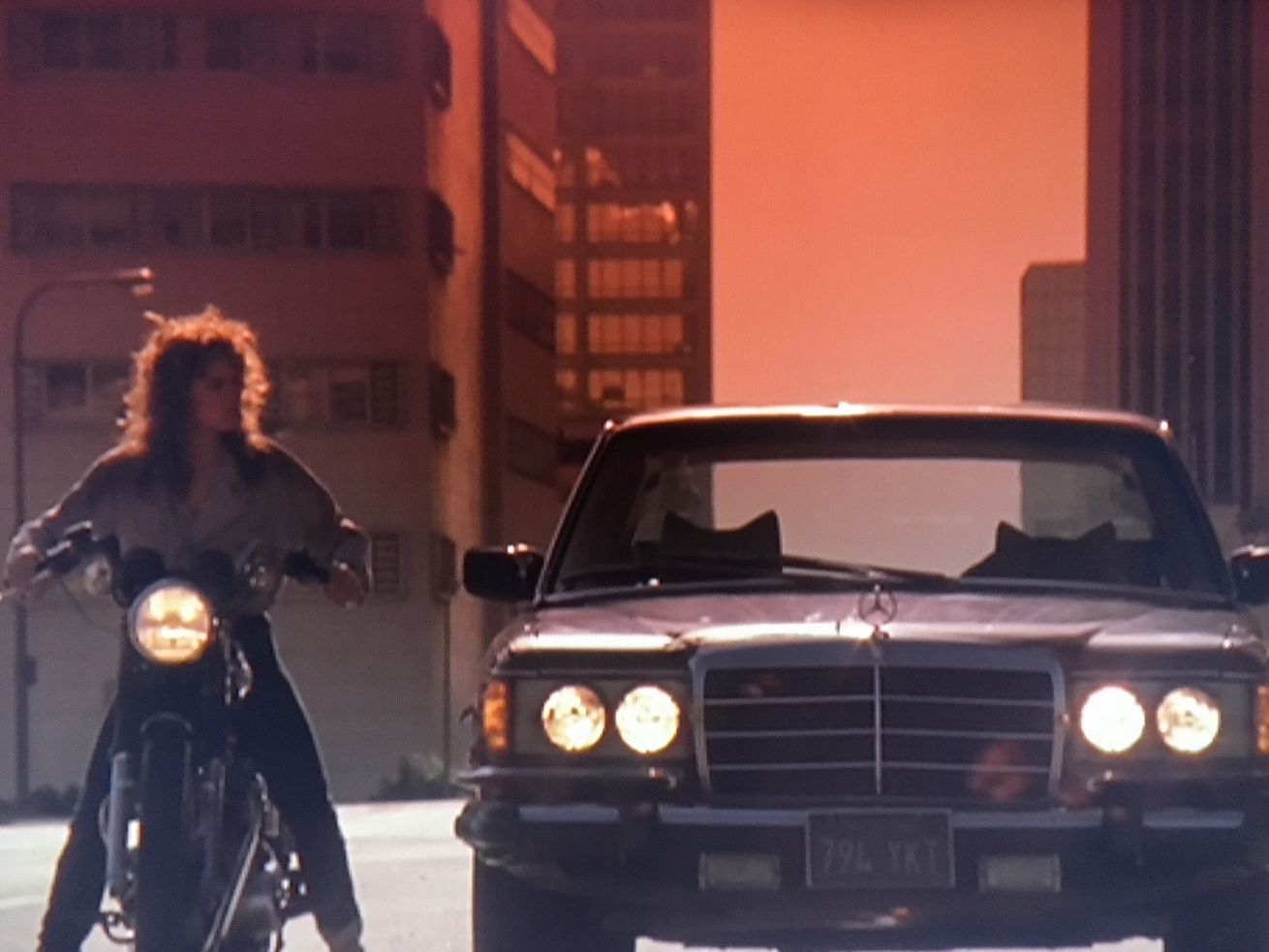 In “Night of the Comet,” characters drive cars and motorcycles down empty LA streets. | Atlantic/MGM

Night of the Comet, a 1984 “B movie” about two Valley Girls navigating a post-apocalyptic Los Angeles, was a minor film even in its day. Now the 35-year-old film feels more relevant than ever.

The low-budget gem, which has attained cult status in the three-plus decades since its release, has lots to offer lovers of so-called “midnight movies.” But it also offers one element every LA denizen can relate to in this period of stay-at-home orders: Empty city streets, stretching from Santa Monica to San Dimas to Lancaster to Lakewood.

In Comet, the urban desolation springs from an entirely different type of cataclysm: The eponymous cosmic snowball, which, upon entering our atmosphere, instantaneously vaporizes nearly every human on Earth and renders almost all the rest into mutants and zombies. The few humans who remain untouched include Regina “Reggie” Belmont (Catherine Mary Stewart) and her younger sister Samantha (Kelli Maroney), two otherwise ordinary LA teenagers who know their way around a firearm thanks to a father on active duty with the Green Berets.

From Earthquake to Independence Day, Night of the Comet is far from the first or last movie to set the apocalypse in LA. But only a select few have shown us what our neighborhoods would look like in the hushed aftermath.

There’s the little-remembered 1954 sci-fi film Target Earth (set in Chicago but shot in LA), which opens with an eerie 10-minute sequence in which a woman wanders the inexplicably depopulated streets of Downtown, her terror growing as she realizes she might be the only human left alive. In 1971, The Omega Man (an adaptation of the classic Richard Matheson novel I Am Legend) had Charlton Heston battling a cult of albino mutants in various locations around the city following a world-ending plague.

Both of those films are worth a watch—if only for their vivid depictions of a Los Angeles drained of human activity—but they are also dour and self-serious. By contrast, Night of the Comet—a tonally unique hybrid of comedy, horror, and science fiction—is like a John Hughes flick shot through the lens of a Roger Corman exploitation cheapie.

Directed by Thom Eberhardt and sprung from the same producers responsible for the hit teen rom-com Valley Girl the previous year, it is flawed and draggy in spots but also charming and sharp-witted. Stewart, Maroney, and Robert Beltran (playing Hector Gomez, a trucker-slash-potential love interest) inhabit their roles with pluck. It is dystopian cinema that will actually make you feel good.

The film is strongest in its first two acts, as Reggie and Samantha–both of whom survive the comet by spending the night in rooms constructed out of steel (a bit of “science” that is never fully explained)–adjust to life in a city where citizens have turned to red dust, leaving the once-bustling highways and byways silent and stark.

Night of the Comet is effective in selling the visual reality of a post-apocalypse LA, something Eberhardt credits to what he affectionately calls “a whole bushel basket of student filmmaker tricks.” Though he was granted a budget of just $700,000 by the film’s distributor Atlantic Releasing Corp., he had enough money to hire two “location cops” to lock down several Downtown streets for outdoor scenes that required a desolate urban landscape.

Eberhardt’s favorite of these shots comes about 20 minutes into the film, when Reggie’s motorcycle pulls up next to a driverless Mercedes on Grand Avenue, just up the street from MOCA and The Broad). Though the scene was filmed in the middle of the day, the director tells Curbed LA he pulled off the shot thanks to those aforementioned location cops and the fact that that section of Grand is elevated, effectively concealing the traffic in the streets below. To complete the effect, the recorded sound was later excised and replaced with what Eberhardt refers to as an “empty city soundtrack.”

One of Eberhardt’s most effective touches comes with a montage of the city the morning after the comet passes through the Earth’s atmosphere, skies now tinted the color of a particularly stunning pink and orange LA sunset. The sequence includes shots of the Westin Bonaventure Hotel, an empty schoolyard (actually Ralph Waldo Emerson Elementary in Burbank), an automated clown (at the still-existing Community Auto Center on Melrose Avenue), and a duo of classic LA sights: a backyard swimming pool and a wide front lawn.

Later in the film, there are shots of deserted streets in several different neighborhoods, from Downtown (Bank of America Plaza is memorably featured in the film’s winning final scene) to Miracle Mile (The El Rey Theatre, standing in for a movie palace) to Porter Ranch (the sisters’ tract home is located at the end of a cul-de-sac on Dunure Place).

Against all odds, given the film’s meager budget, the illusion works. “Once you’ve got a couple of wide shots,” says Eberhardt, “[the audience] believe[s] you after that.”

Any Angeleno who has been out and about since all non-essential businesses, beaches, and parks were ordered closed due to the coronavirus pandemic can relate to Reggie and Samantha’s sense of dislocation. A Los Angeles in which a person can travel between Downtown and Santa Monica in 20 minutes, where no one worries about getting a street sweeping ticket and where the air perpetually smells like the morning after a soaking rainstorm, is a Los Angeles we are starting to recognize.

That makes walking or driving the LA streets and highways these days a disconcerting, eerie and–perhaps more than any of us would care to admit under the circumstances– exhilarating experience. When was the last time you were able to walk across Olympic Boulevard in the middle of the afternoon without cars whizzing by?

Unlike in Night of the Comet, of course, LA’s vacant boulevards aren’t the sign of a mass extinction but rather a heartening indication that residents are taking quarantine orders seriously. Still, coupled with the bleak news cycle we’re living through, the unusual stillness can stir up apocalyptic feelings.

“There’s something about empty cities that’s just creepy,” says Eberhardt. “It falls into the same category as creepy clowns and creepy little kids. It’s the thing that shouldn’t be creepy, but is. It’s like a counterpoint to what it should be.”

In Comet, the sight of empty streets littered with piles of clothing that once contained living human bodies initially fills the sisters with dread. “Where are the kids?” Reggie bellows at Sam as they digest the full scope of the disaster. “It’s Saturday morning. Where are the goddamn kids?”

Given its B-movie origins, Comet doesn’t dwell on these existential matters for long. The saddest scene in the film, in which Samantha mourns the deaths of her friend and a potential high-school beau, quickly pivots to a montage of the sisters engaging in a no-cost shopping spree at the former Bullock’s in Woodland Hills, all scored to a bargain cover of Cyndi Lauper’s “Girls Just Want to Have Fun.” The consumerist revelry is relatable; in times of crisis, many of us have felt the American impulse to try and spend our way out of it.

When they aren’t battling mutated department-store stock boys or dealing with cartoonishly evil scientists, the gun-toting teens, who slip in and out of Val-gal vernacular over the course of the film, take advantage of the uninhabited city in other ways. One of the most enjoyable bits in the film has Samantha taking over the broadcast of a neon-lit radio station (its exterior is located on Boyd Street in Downtown’s Toy District), which has continued operating on autopilot, the pre-recorded DJ having since been vaporized along with the rest of humanity.

Elsewhere in the film, scenes of the surviving characters driving cars and motorcycles down deserted LA streets offers a vicarious kind of thrill. As Hector says after traversing the ordinarily jam-packed 405, “We go through those freeways like turkey crap through a tin horn.” But while the thought of taking advantage of those empty boulevards may sound like a good time to some, our own mayor is wisely urging us not to speed just because we can— meaning we’ll have to content ourselves with living that particular fantasy through Reggie and Samantha’s eyes.

Night of the Comet is not great cinema, but it is a pleasurable time capsule, smarter than you might expect, and suddenly analogous to the present moment. “Most of you guys had finals this week—ha, later, they’re history,” says Samantha, broadcasting live to a dead city. “They’re canceled.” Today, finals aren’t canceled. Students are taking them online, and in the ’80s, we might not have seen that coming.